If Web Developers Were Lawyers, Half Of Them Should Be Struck Off 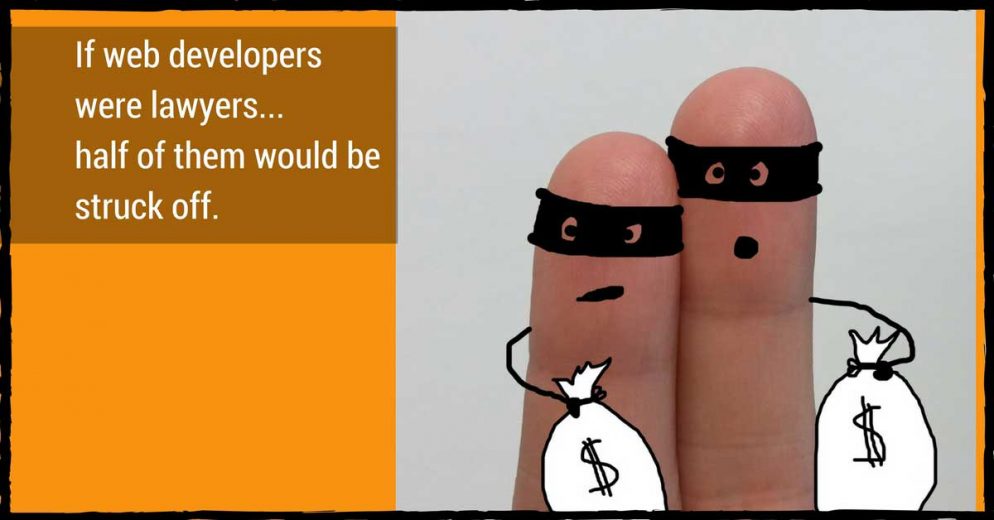 Do you get frustrated with the process of web development?  What about a tradesman, when they turn up, leave the job before you get a chance to inspect it, and you’re left with a half finished job?

Annoying isn’t it. This happened to me several times during a house build.

Do Tradesmen Frustrate You?

One tradesman spent more time explaining why they didn’t normally seal a splashback to me, than it would have taken him to seal it (total time : 20 seconds to seal it).

The same tradesman asked me which way up I wanted an aluminium seal behind my sink. To me it appeared to be pretty obvious – there was an L shaped lip that would stop the water. To make matters worse, it was 20cm too long, so he had to get another cut, and another week disappeared.

I have one wall next to my kitchen. There’s 3 light switches, one underfloor heating switch, and a heat pump wall switch.

Not one of them are lined up, it’s like they’ve thrown them at the wall and put them where they stuck.

One of the worst ones – an expensive ducted heat pump system that “won’t cost more than $200 a month to run”. It does. Much more.

The other day I stuck my head into the roof space above the garage to check a noise. I glanced over at the space above the lounge and realised there was no insulation above it!! I couldn’t believe it either. No wonder the room was so bloody cold compared to the others.

The best thing about all the stories above?

They’re all visible (although the insulation was stretching it – how often to you stick your head into the roof space?)

I can have a look at them and see there’s something wrong.

Unfortunately, most businesses trust their business to web developers, and exactly the same type of things happen.

The worst thing is, to a business owner, or internal marketing person, most of the things that aren’t done correctly are completely invisible.

…until your website traffic drops off a cliff.
…until people don’t convert on your website.
…until 6 months later and you wonder why your online advertising isn’t bringing any business.
…until your phone call tracking is broken.

And I mean, every day.

That’s every day AFTER a web developer has been paid for a project, and the business owner has been delighted with their fancy new website.

It could be a simple usability error (phone numbers not clickable people?) to something that has the potential to kill a business overnight.

I think I’ve seen it all, then I see something else shocking.

If web developers were lawyers, half of them should be struck off.Click To Tweet

Think I’m making this up?

Sadly the list below is just scratching the surface.  I’ll write a longer blog post just with examples sometime in the future.

Who’s fault is it?

Mostly it’s the web developers. They are doing things they are not qualified for or taking on additional elements they don’t have enough experience in (e.g. AdWords).
Either that or they are not investing enough in their education.

** There are some awesome web developers out there though, and I’ve worked with some of them too **

Partly it’s the business owners fault for expecting too much of them. You wouldn’t normally get a labourer to architect your house.

Developers have a complicated job – dealing with different browsers, databases, styling etc
(some hobby developers probably aren’t even aware there’s a database behind their website).

(I also know what I’m talking about – I’ve been on two major online banking projects as a lead developer, and technical architect including the world’s largest supermarket bank, and a database administrator in a media company)

How have to ask many questions from who you are trusting your online presence in and build the appropriate team.

There’s some awesome web developers out there, but they are definitely not digital marketers.

I’m a bit fed up of it. People are not getting value for money.

Don’t trust your digital marketing to developers, of hobby people who can throw up a website on some crappy platform (see an article about that in the comments).

You need to get a qualified digital marketer involved in any online project. That’s someone who does more than just post on Facebook.

A good digital marketer is the best investment you can have in any online project. They’ll save your project, and I’ve done it many times, and often for far cheaper than your developer (that’s a bit ironic isn’t it).

Have you had a similar experience?

If you know someone who’s had a similar experience, or would benefit from the stories above, comment below to raise people’s awareness and help them avoid them going through the same pain.

Do you have a similar experience that would help others?

Darren Craig offers practical advice to business owners and marketers on how to get more exposure online and get more leads. Sign up to find out about webinars, online courses and free advice. Take control of your brand online today.

Good article! And yes, it is shocking how many business owners think it is a good idea to get their website developed by their IT guy or their printer. These guys are great at sorting out your email or your brochures but they don’t understand SEO or Google – no matter what they tell you :(

You know what is worse? Marketing people who think they know what their doing who insist of having 2000 tons of javascript loaded up into their website so they check analytics. Do you know how many so called marketing experts I deal with daily who insist on crap their website doesn’t need but who read an article on some retarded donkey fuckers website and now decided to run with that idea? Yea, there are a ton of unqualified morons building shit tastically bad wordpress sites loaded up with crap like Yoast, Social Warfare and other useless plugins installed by lazy people who don’t want to do a little manual work, so instead they install plugins to do everything for them. If a wordpress site has more than 5 plugins installed, they should do something custom instead of wordpress.

This is going to fall on deaf ears anyway, but when it comes to web development sometimes it is the developer, but a lot of times it’s the donkey fucking retarded marketing people.

Hi Thanks for you comment. And just to show I’m balanced, yes I’m putting it up here. I absolutely get the irony…. in my agency network we often say agencies have some of the worst sites as they are too busy doing client work. But yes, there are a TON of absolutely terrible ‘digital marketers’ and ‘SEO’ people as well….just like plumbers, builders etc etc.