Are you running a Google AdWords campaign in house, or not sure if your current agency is running your campaigns effectively?

We can perform a Google Analytics audit for your and feed back recommendations for you, or us, to do to improve the quality of your campaigns and make your budget go further.

AdWords is a platform where Google makes it very easy to get a campaign up and running, but it’s a complicated beast, and if you’re not aware of all the features and nuances of the platform, it’s very easy to spend way more money than you need to be.

I’ve even seen campaigns that haven’t been linked to Google Analytics.  People should be locked up for less – if that’s not happening you have no way of knowing whether your campaigns are successful.

Usually when we meet businesses running AdWords campaigns in house, they’re not being done effectively.  This isn’t because the people are bad, it’s just that it’s usually a tiny part of their job, and they don’t have time to keep up.  Does that sound familiar?

Not only this, but although you think you’re saving money by running it in house, it’s still costing you time, and time is money, never mind whether the campaign’s working at an optimum level or not.

AdWords changes a lot every year. There’s new features, new options, new ad formats, new ways of being seen by the right audiences.  If you’re not on top of it, your competitors probably are.

Google makes it easy to set up a campaign and get an ad live, but not to do it effectively.  They even give you misleading advice such as below (taken from their help screens) : 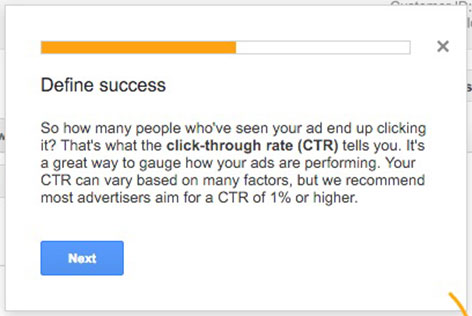 There’s one key word in that help pop up – gauge.  Click through rate is a gauge of the percentage of people who find your ad attractive, but not how much revenue or leads you are getting from it – the two can be very contradicting.  This is the kind of data you need to be able to interpret correctly to successfully run a campaign.

Do you also realise the structure of your account, the keyword types and your landing pages can make a dramatic difference to how much you pay for your ads?

What if I told you the top ad position doesn’t necessarily bid the highest?

Your Ad Campaign May Be Working Better Than You Think

One of the hidden benefits of getting an audit is you may discover your campaigns are working better than you realise.  Imagine if you found our you were under reporting the returns to your boss, and you could look better almost instantly?

When I took on my first big campaign I was a bit nervous as you’d expect.  The problem was the previous agency were over reporting the returns from the campaign. It was very easy for us to notice this as we’re analytics ninjas too.  How would I beat a campaign that was over reporting?

It turned out to be quite easy.  There were many important goals on the websites, and phone numbers that weren’t being tracked.  When we added that into the campaign, the returns went up by almost 600%.

Let us audit your account and find out if your campaign could be more effective.  We can check which features are being used, abused, or used incorrectly.  We can also see if there are areas of your campaign that should have less focus so your budget can be used in more appropriate areas.

It’s Easy To Get Your Audit

All we need is you client ID from the top right of the account, and we can start the audit from there.  Just imagine if your audit revealed areas that could make a drastic difference to your campaign.  The audit could pay for itself many times over, and think of all your time you’d be saving.