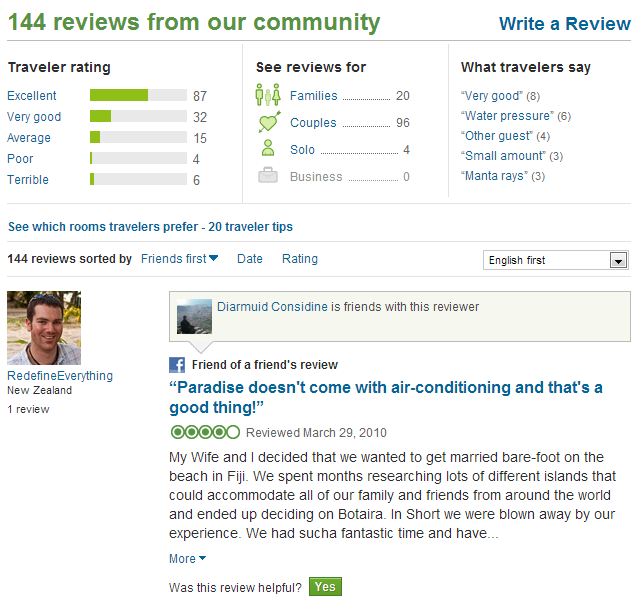 40% of UK travellers are already using social media to help research a holiday.  In five years time 48% of the industry believes social media will be more important than Pay Per Click.

These kind of stats reveal why it can make a significant difference getting ahead of the game in social media.  Facebook Check-Ins are already widely used by companies, and although it hasn’t been rolled out to everyone yet, Facebook Graph Search lets many users to input searches like ‘where did my friends eat in Sydney’.  With Facebook also introducing reviews they are encroaching on some of Google’s platforms, and trying to keep users within Facebook.

Although Tripadvisor isn’t a social media platform as such, it’s integration with Facebook is so powerful with the ‘social proof’ it introduces as shown in the image below.

This is like social proof gone mad…this review is a friend of a friend of someone I met travelling in Vietnam 6 years ago, who I’ve never met before, but I’ve kept in touch with him via social media.  Does it still count?  Yes, and quite a lot – he was a great guy, so his friend probably is too (after all, I’m on of them ;-)).  The power of social proof….

Statistics taken from article at http://www.tnooz.com/2011/11/07/news/social-media-becoming-most-important-marketing-channel-for-travel-ppc-in-fourth-place/